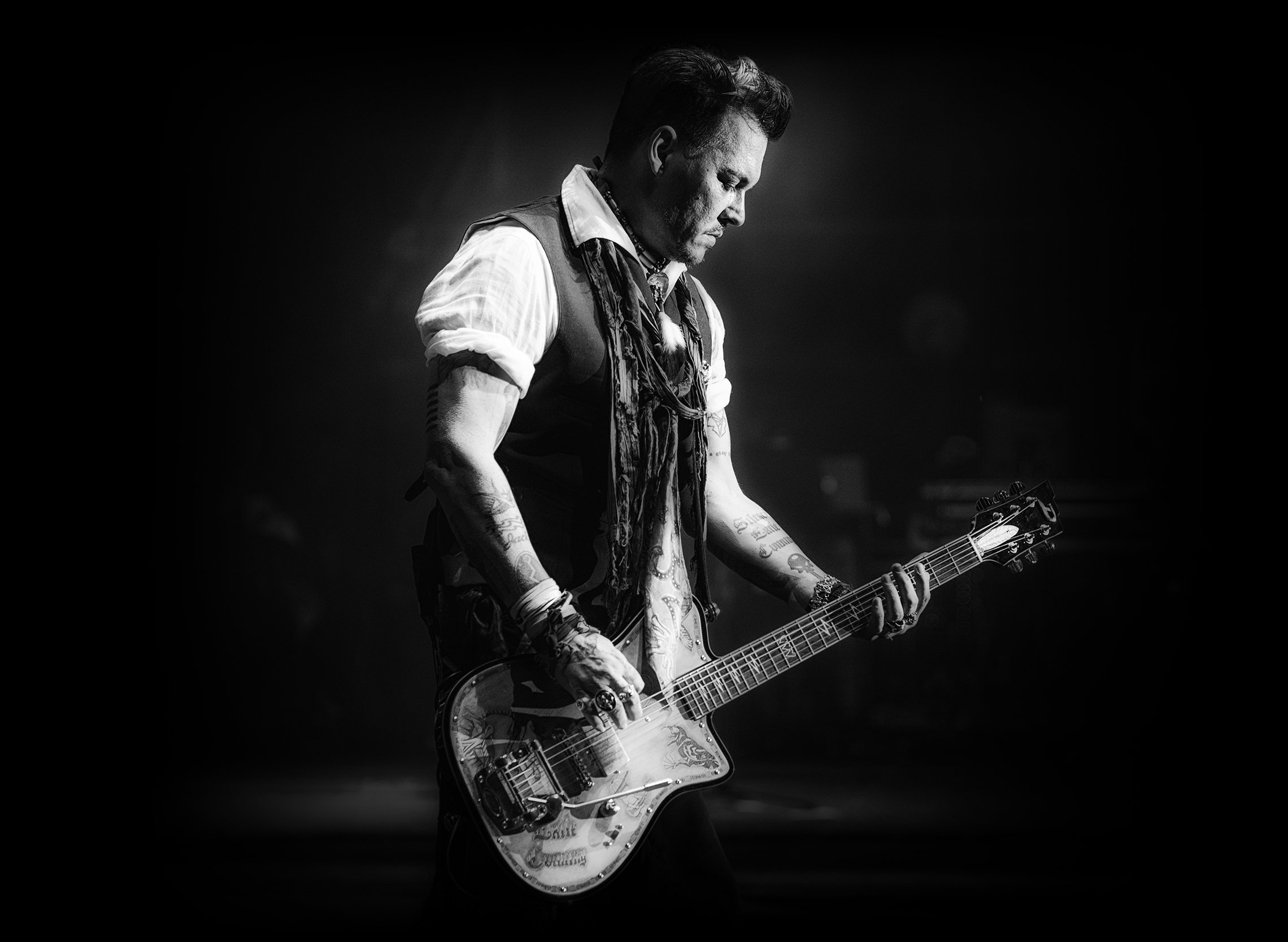 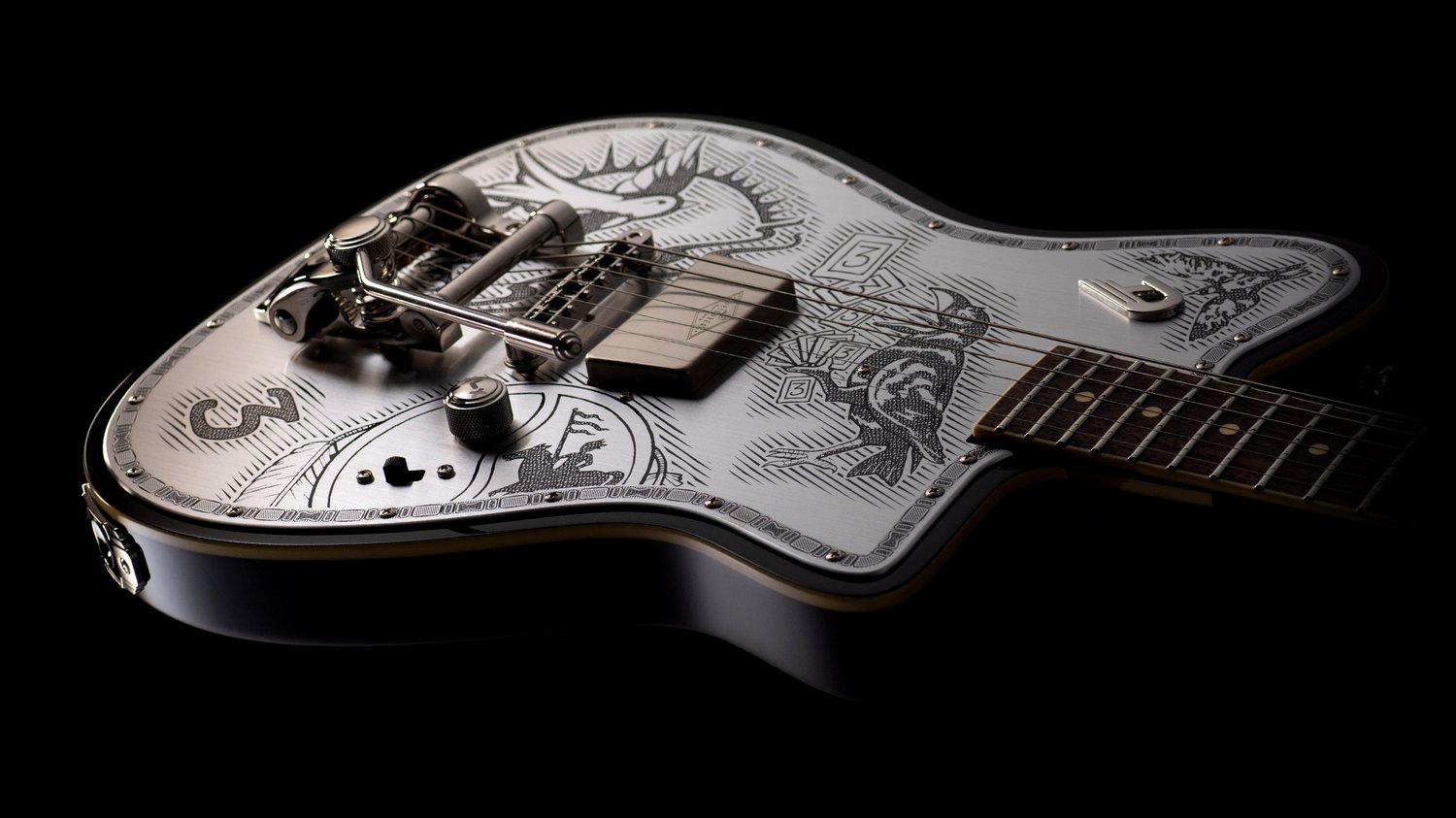 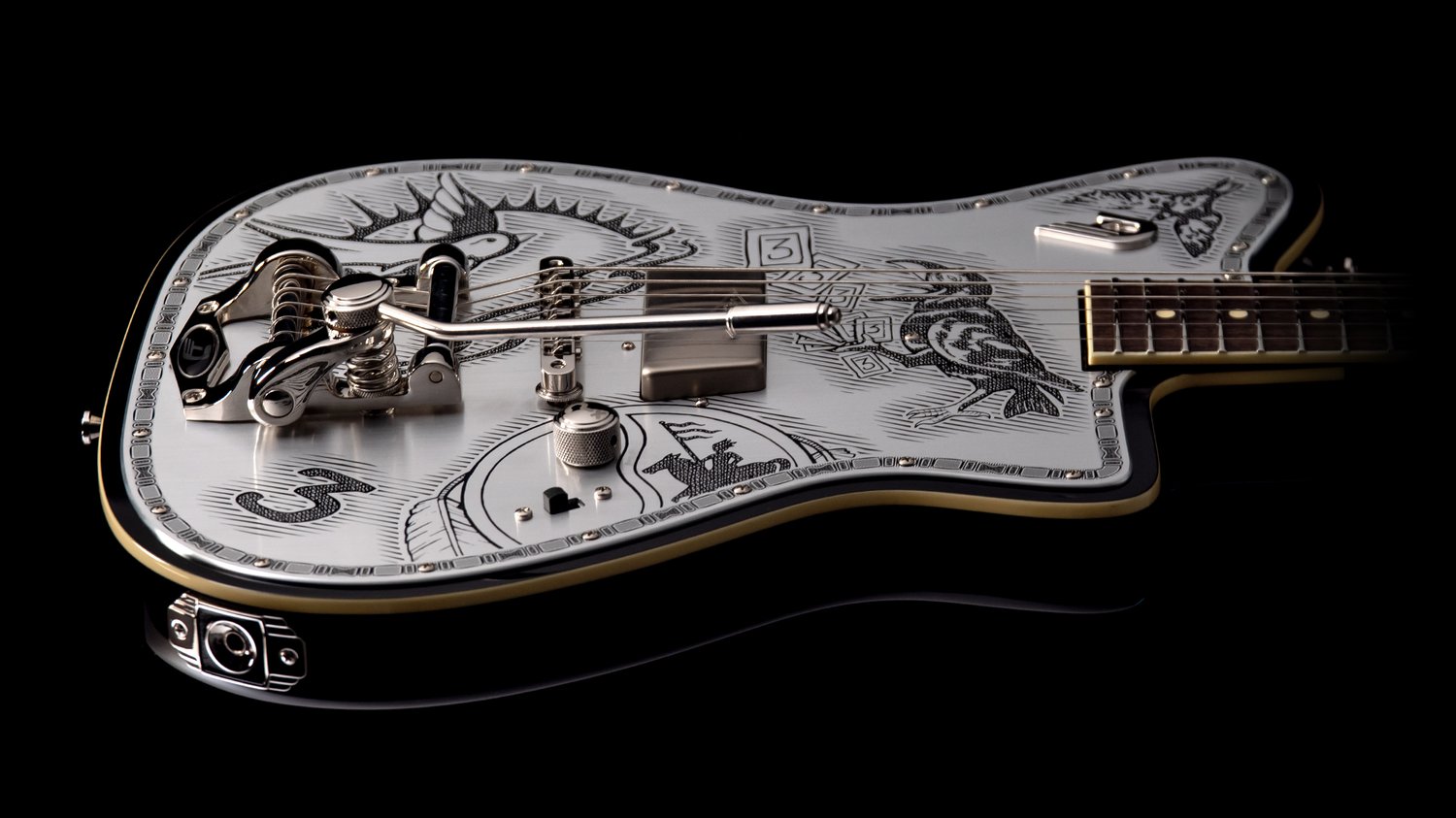 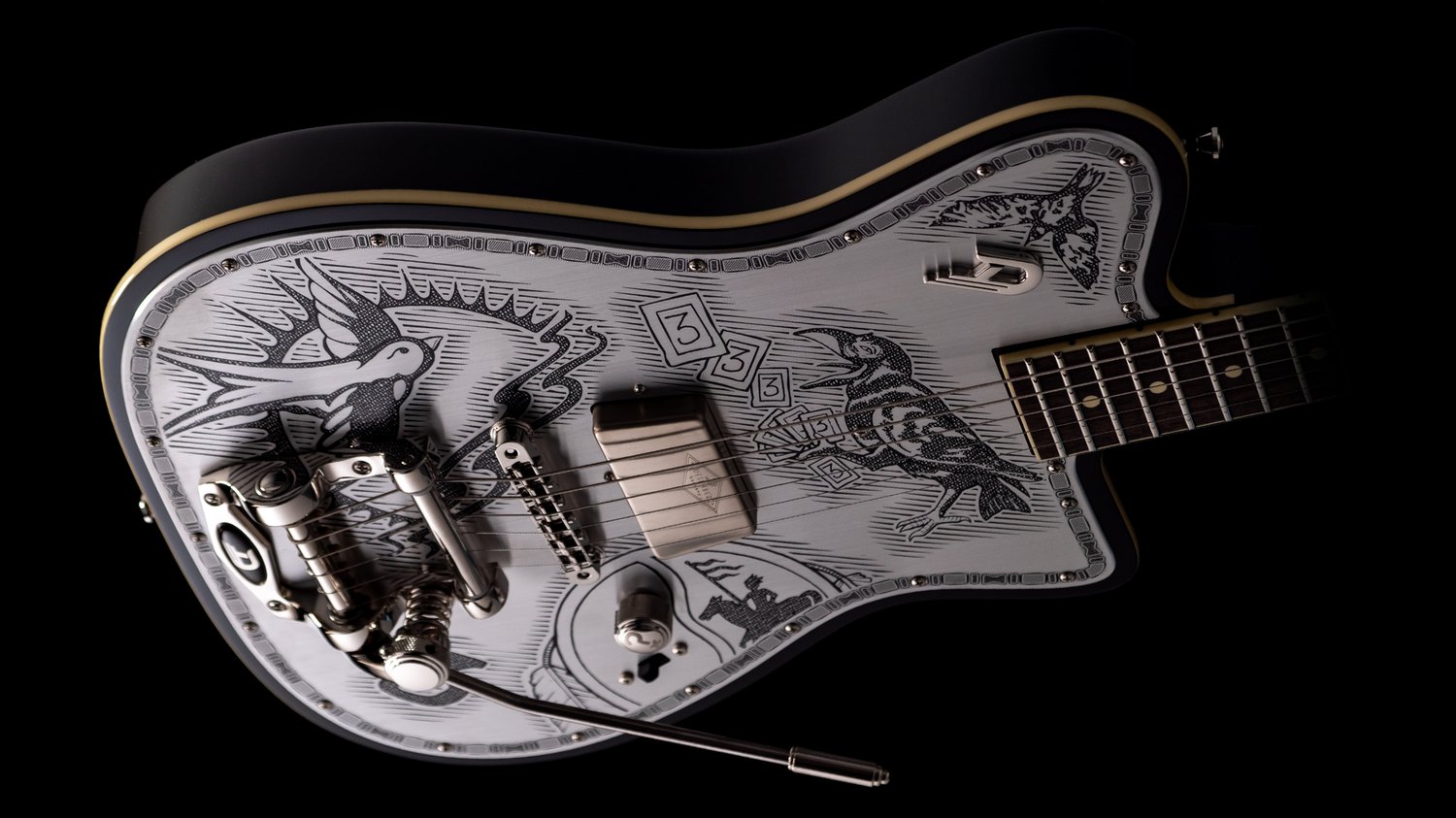 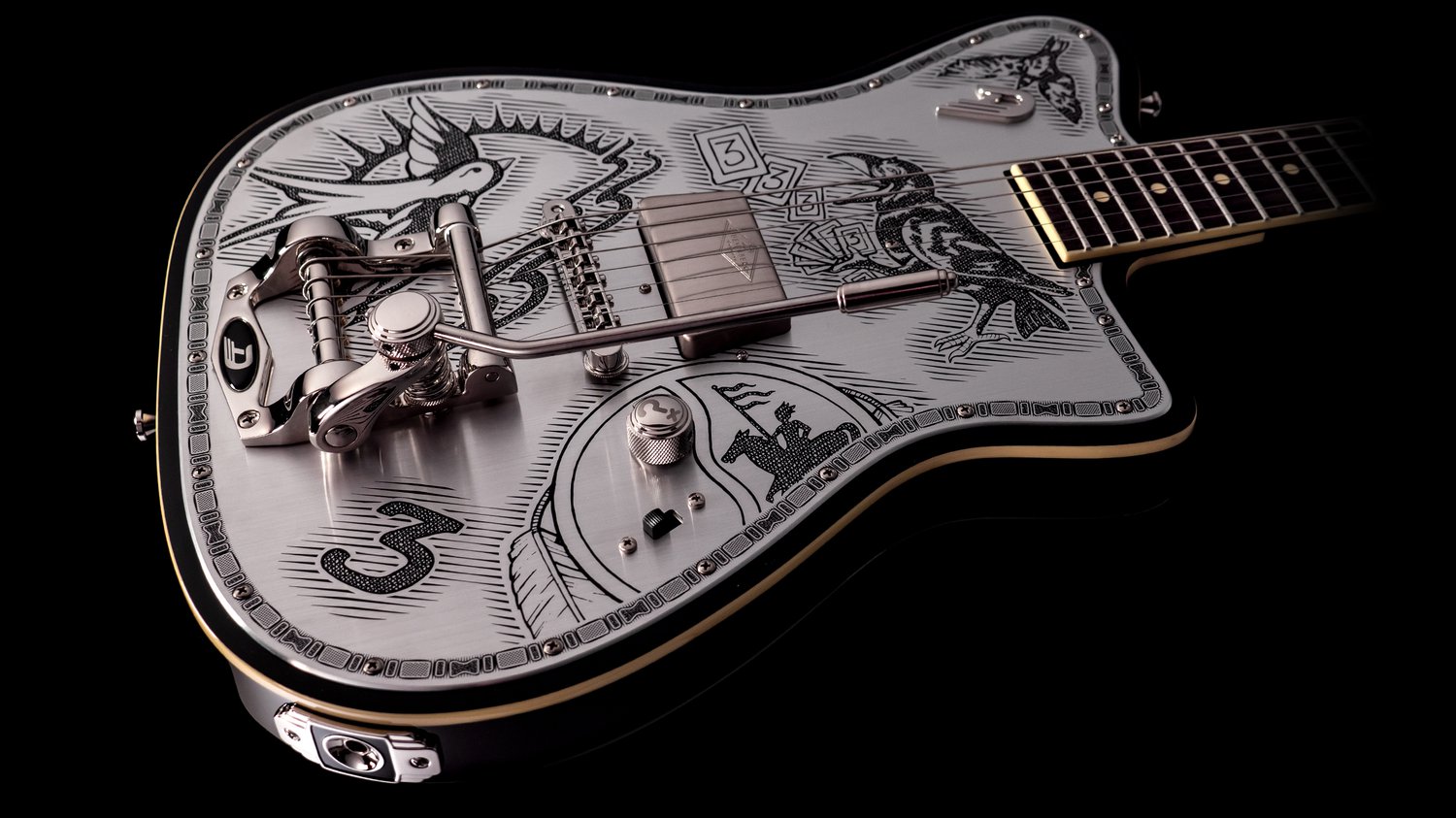 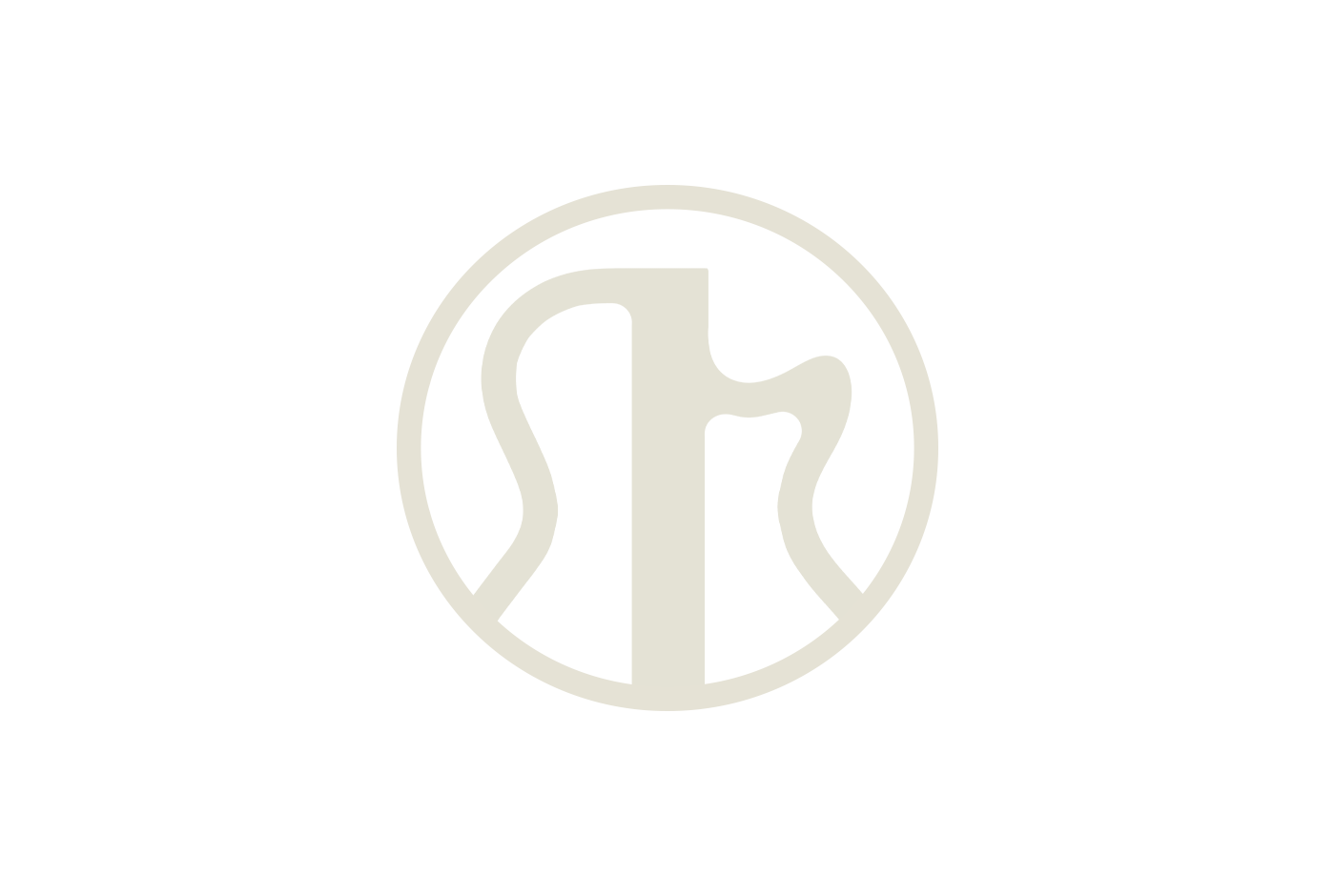 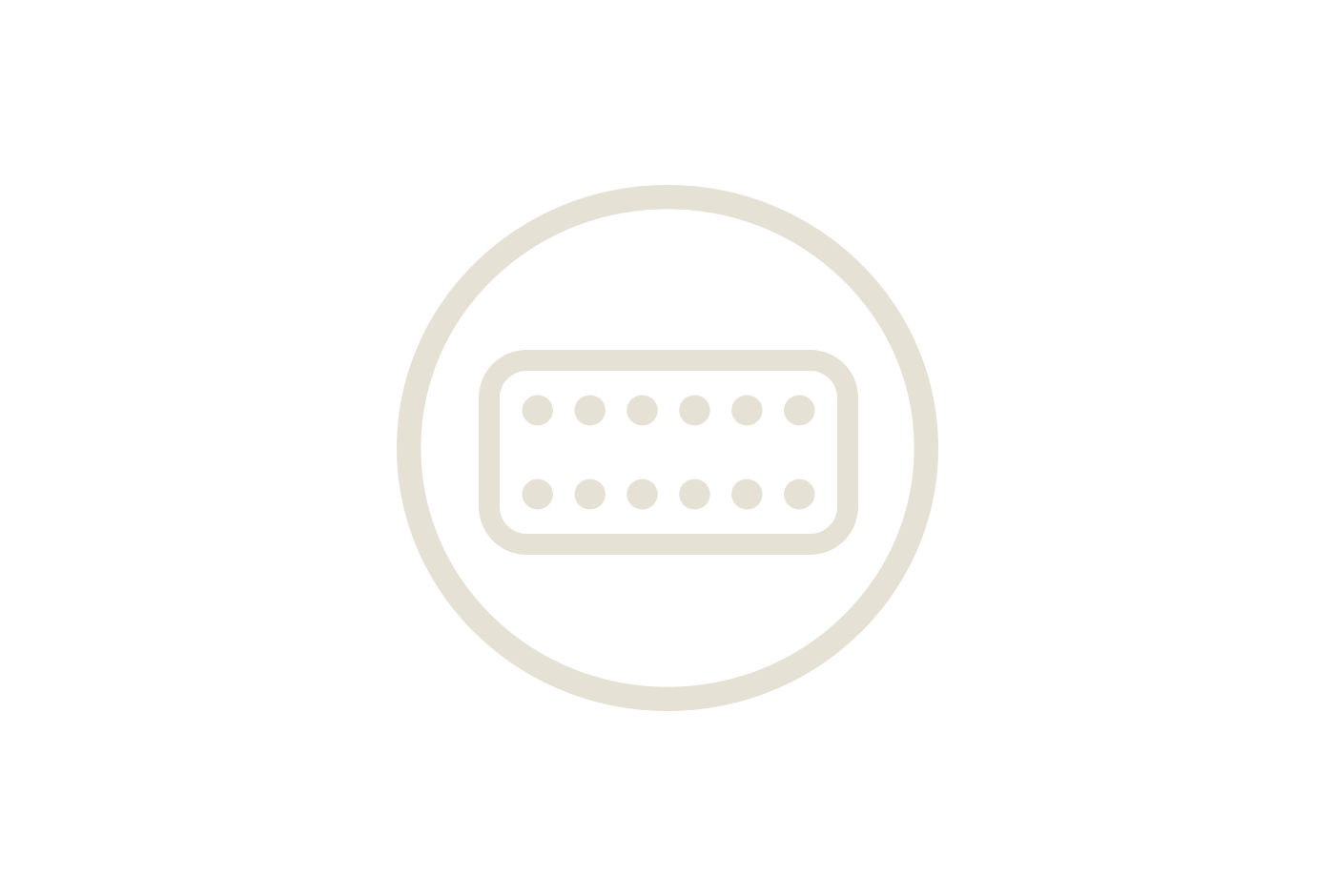 A single P90 pickup in the bridge position has always been a clear indication of a straight foward rock guitar. We have developed a completely new pickup for this Alliance Series. Read more on the JD-63 pickup below. 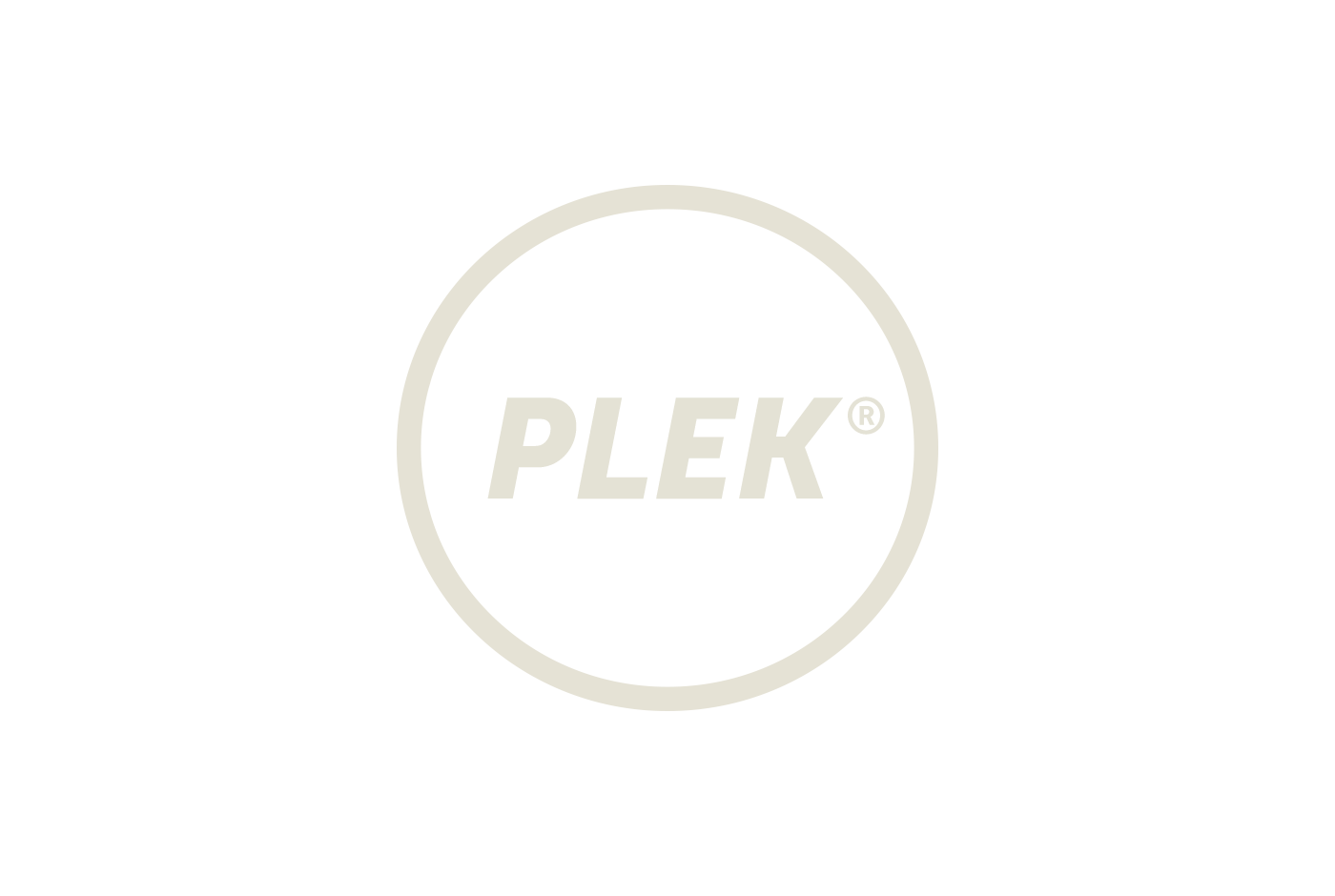 A pleked fretboard guarantees perfectly level frets. This is the basis for our fret polishing and setup work all done by hand that eventually makes our instruments play like nothing you have ever played before.

When we first met Johnny to talk about a personal guitar for him, we told him that we wanted to build one which not only suits his style and needs but one which tells a story. His story.

Being one of the most in-demand actors of the past 25 years, and best known for his character Jack Sparrow in the Pirates of Caribbean movies, we have designed his iconic guitar in the Duesenberg tradition by telling Johnny’s story from his tattoos. Each one symbolizes a significant event in his life. 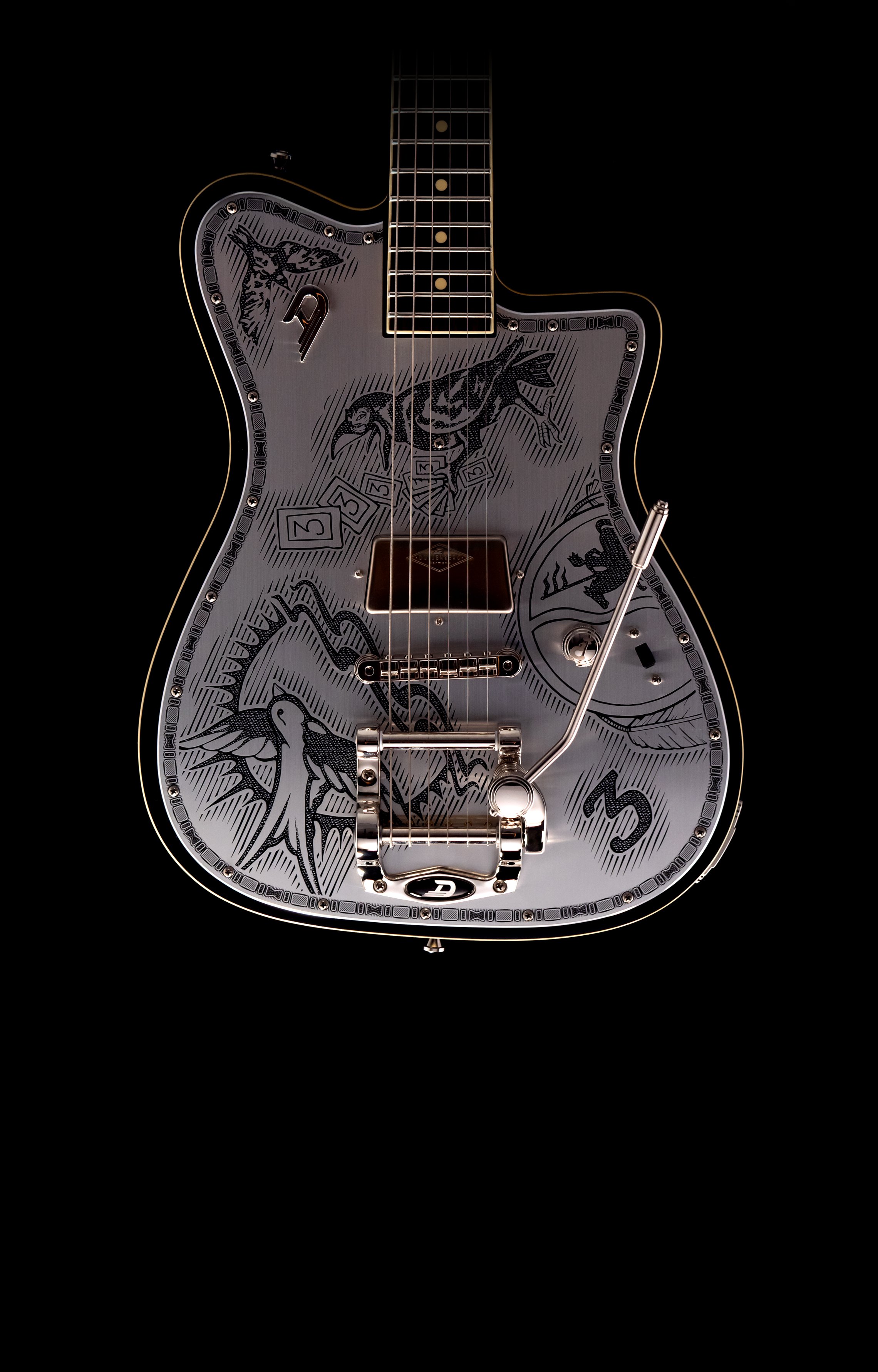 MEET THE VIBRATO SYSTEM THAT HAS CHANGED THE IDEA OF WHAT A CLASSIC DESIGN CAN DO.

Buttery smooth action, reliable tuning stability and string changes that are a breeze are just the main aspects of our unique vibrato design.

The Diamond Deluxe gives you the best tone while being lightweight. Heavy duty needle and nylon bearings give you the highly responsive Duesenberg feel when using the vibrato arm. The arm itself can be turned freely for 360° and can be adjusted to your preferred angle and length. The strings are simply guided through the holes in the bar underneath the arm-axis and can be lead to the tuners without any hassle.

Proven daily on the stages of this world. 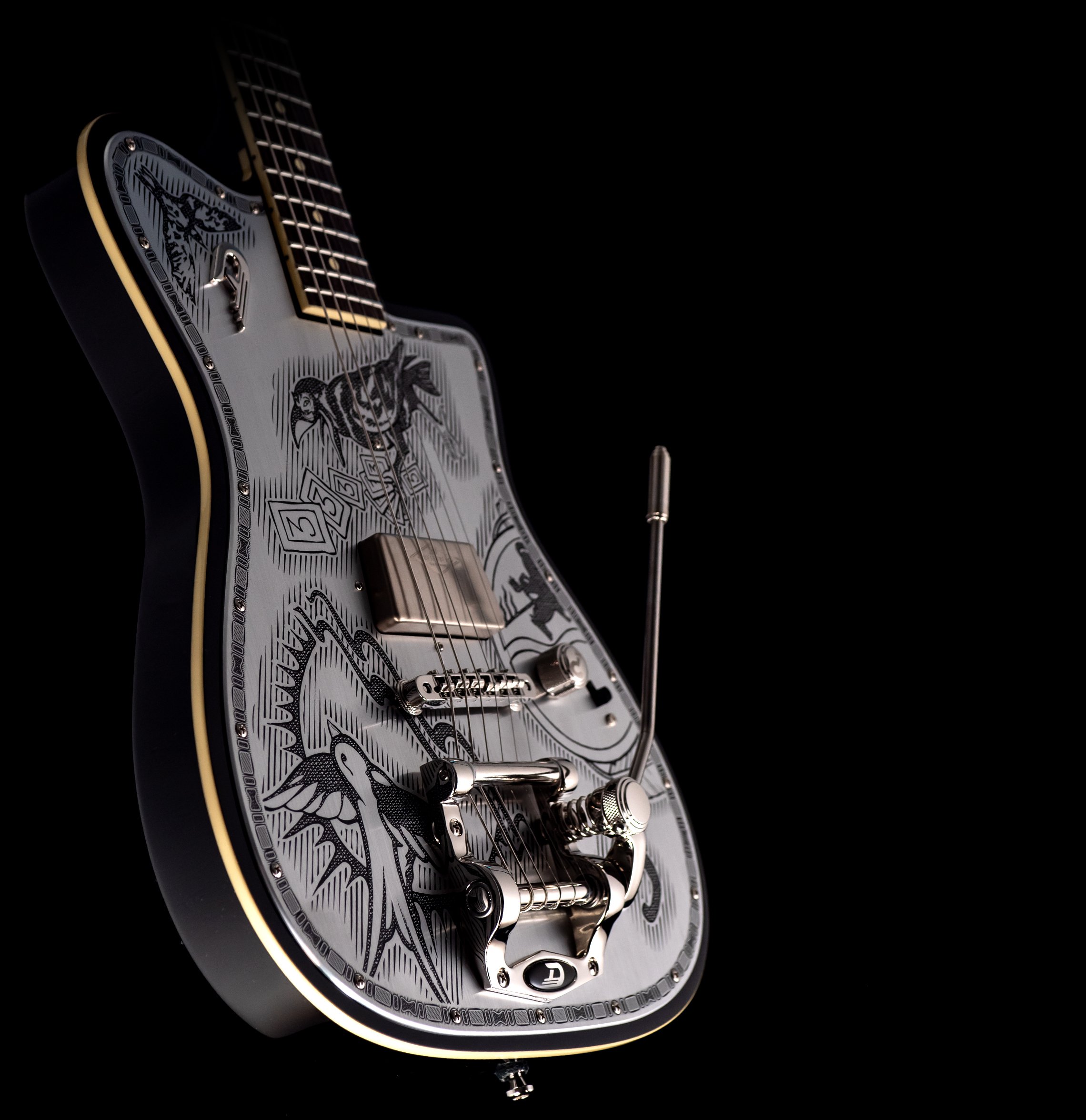 What makes this guitar even more unique is the custom tapped JD-63 pickup which was specially designed to meet every characteristic of a classic open sounding P90 singlecoil. Taking it a step further we offer the option of adding 1963 turns of pickup wire (1963 is Johnny’s year of birth) to the signal via a small switch creating a warmer and crunchier tone.

This pickup is perfectly suited for creating punchy walls of tone and tear them down. 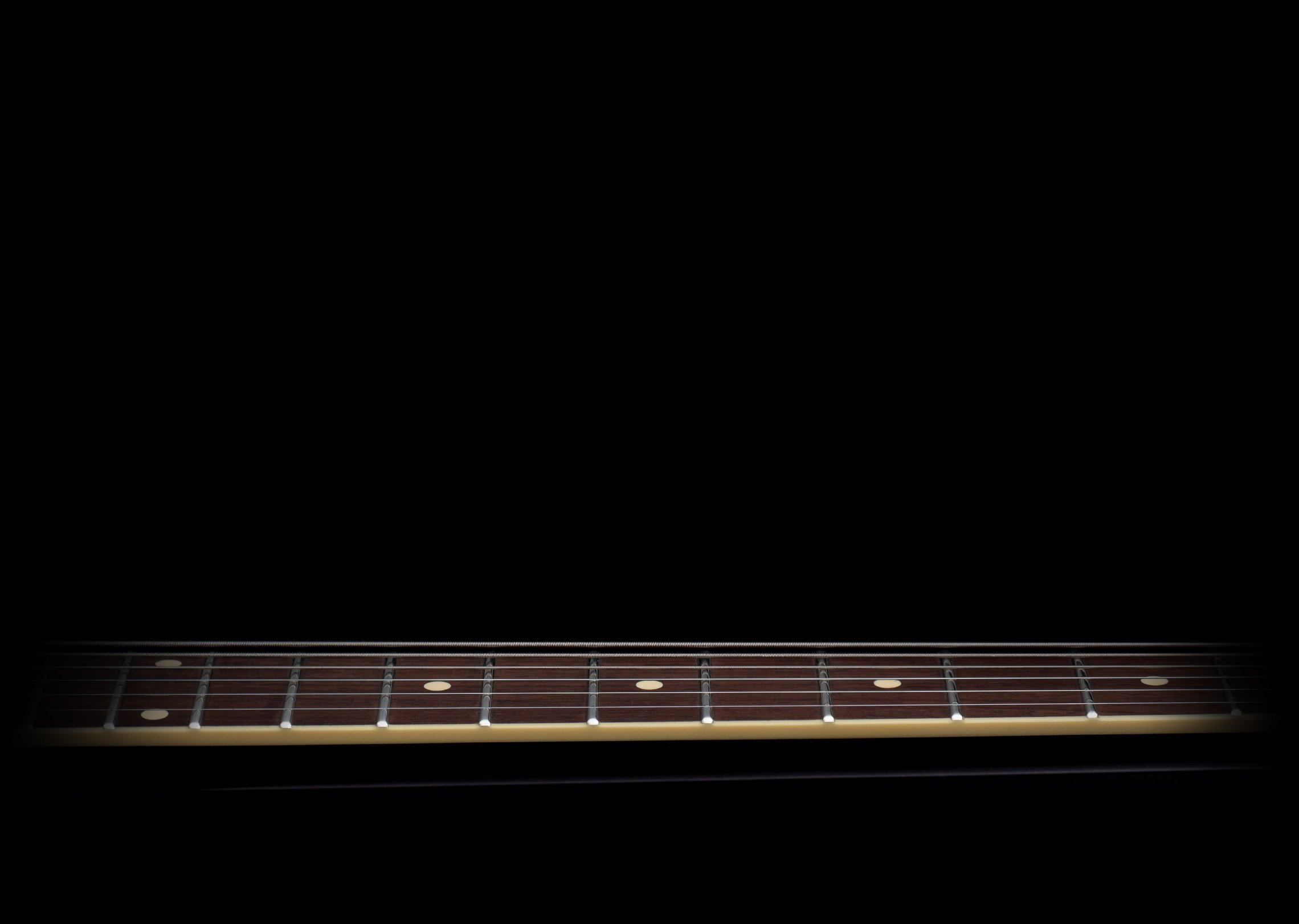 The fretboard is to your music, what the handle of a brush is to a painting. It says a lot about an instrument how much care was taken here.

Every single Duesenberg instrument is expertly pleked for buzz-free playability all throughout the fretboard. It is then carefully finished by hand and precisely set up by one of our professional luthiers. The luthier responsible also leaves his or her signature inside the instrument.

This all is our promise to you that a Duesenberg instrument will always feel great in your hands. 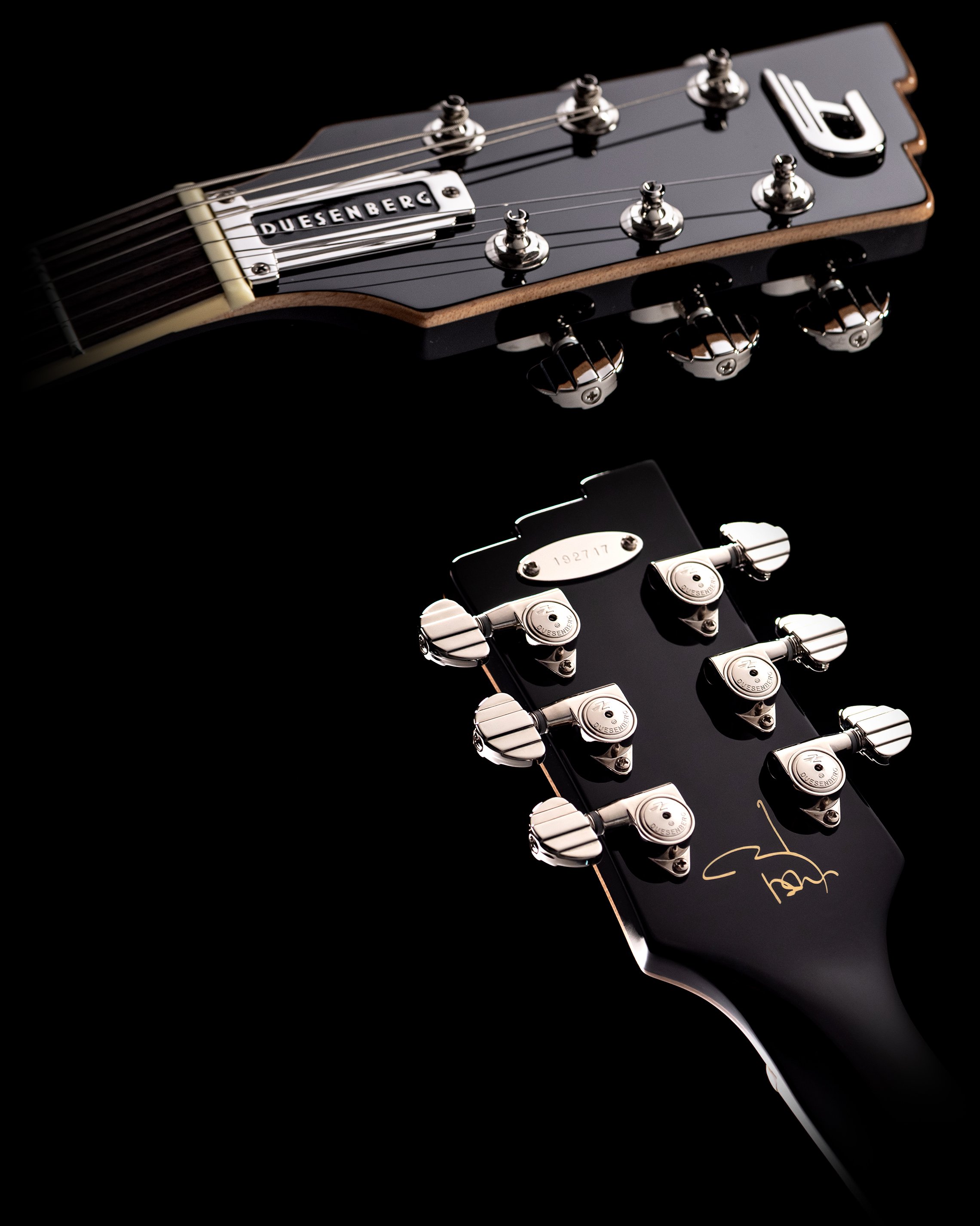 Duesenberg Z-Tuners are specifically made to give you a super smooth and precise feel when tuning. They also allow you to elegantly hide the end of the cut-off string inside the tuner shaft so it's not damaging your case, gigbag or fingertips. 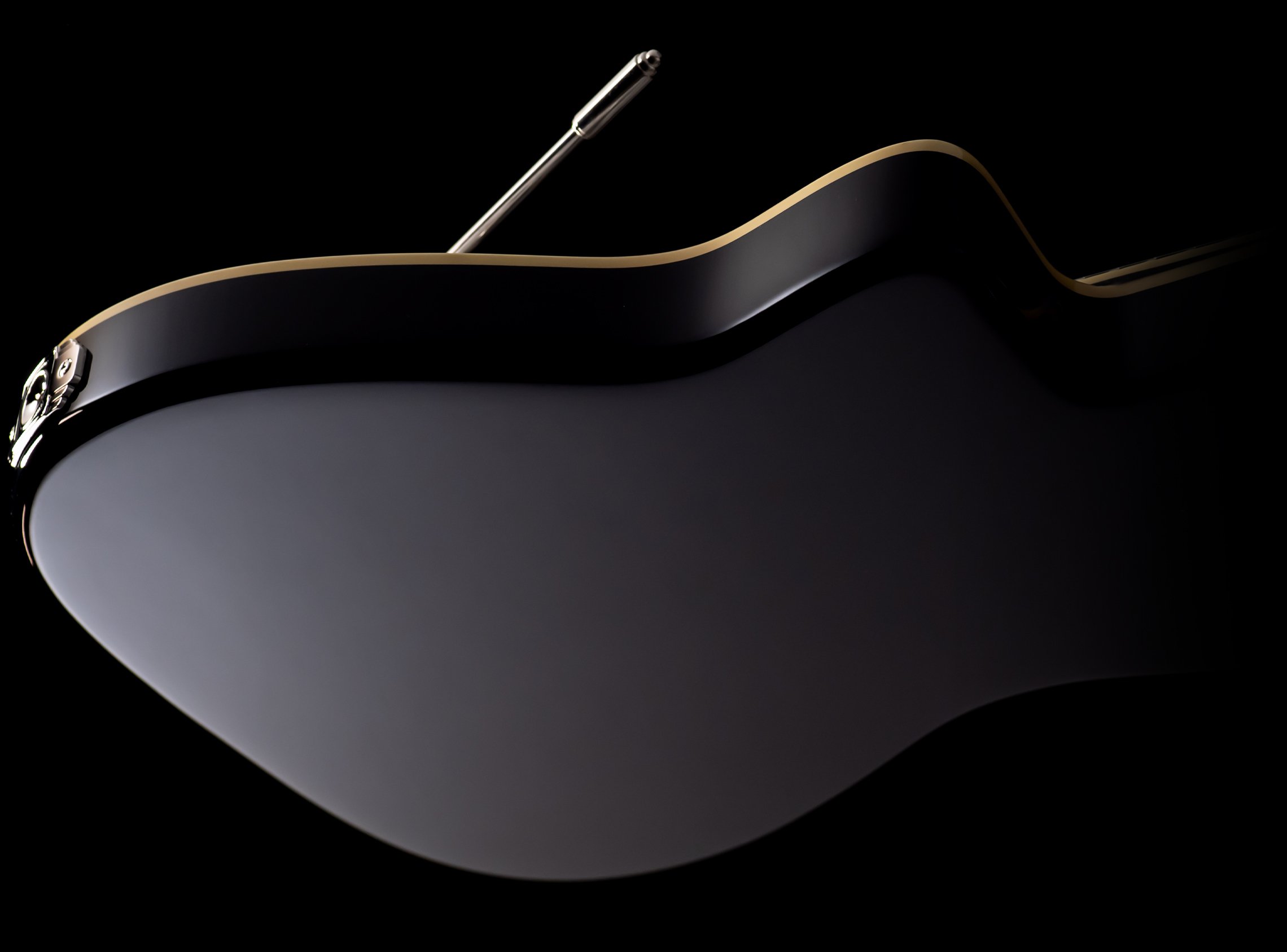 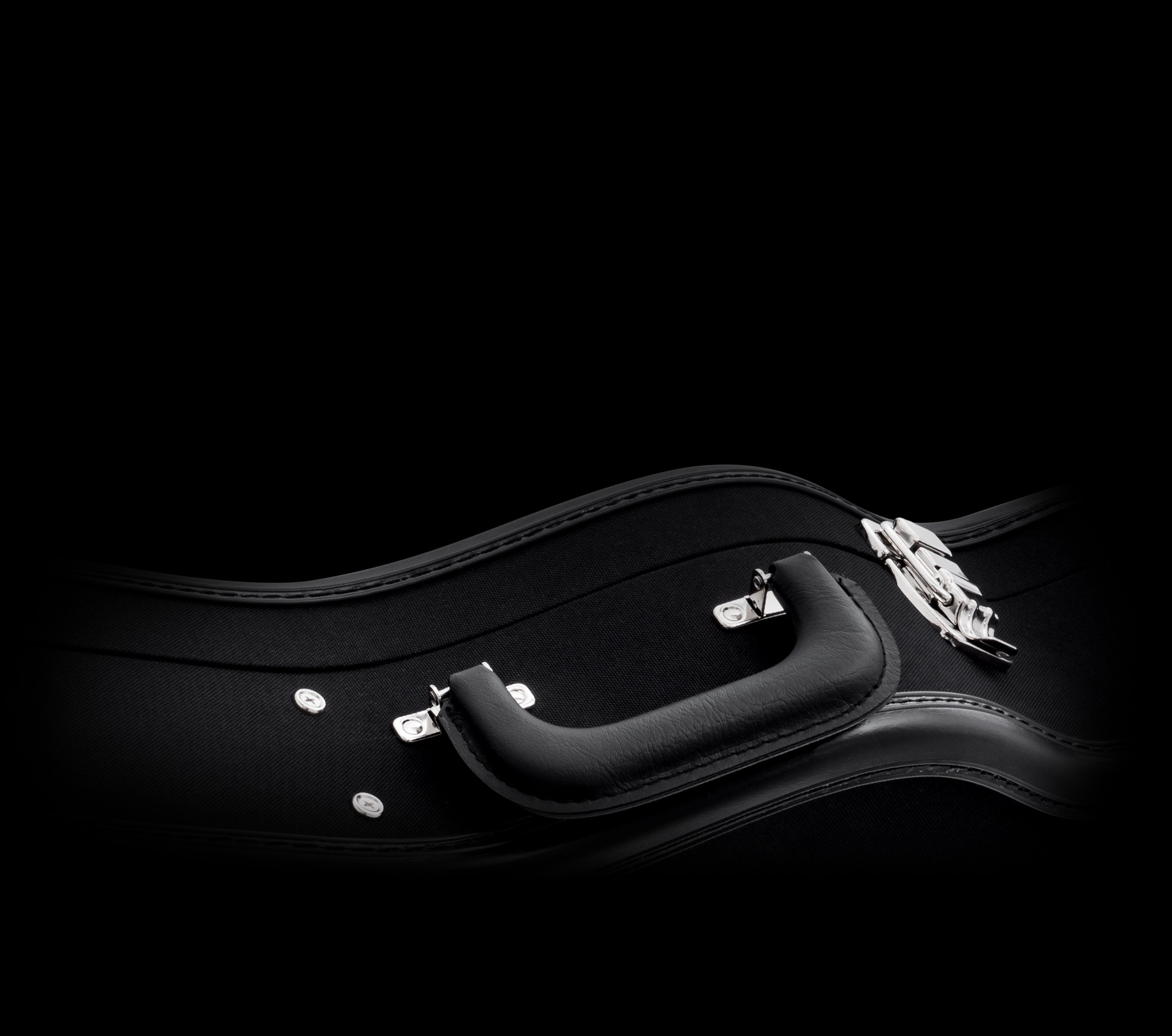 Made to hold something that lasts

A good case is one that's more sturdy than what's inside.

Handsome, laid-back and simply a good place for your instrument. Meet the Duesenberg Custom Line Cases. True flightcase quality, classically shaped, beautifully handcrafted and made to endure the most realistic and unrealistic abuses. It's a case you can just throw in the back of a car, train or airplane and won't have to worry about.

This instrument comes including the Duesenberg Custom Line Case as standard. 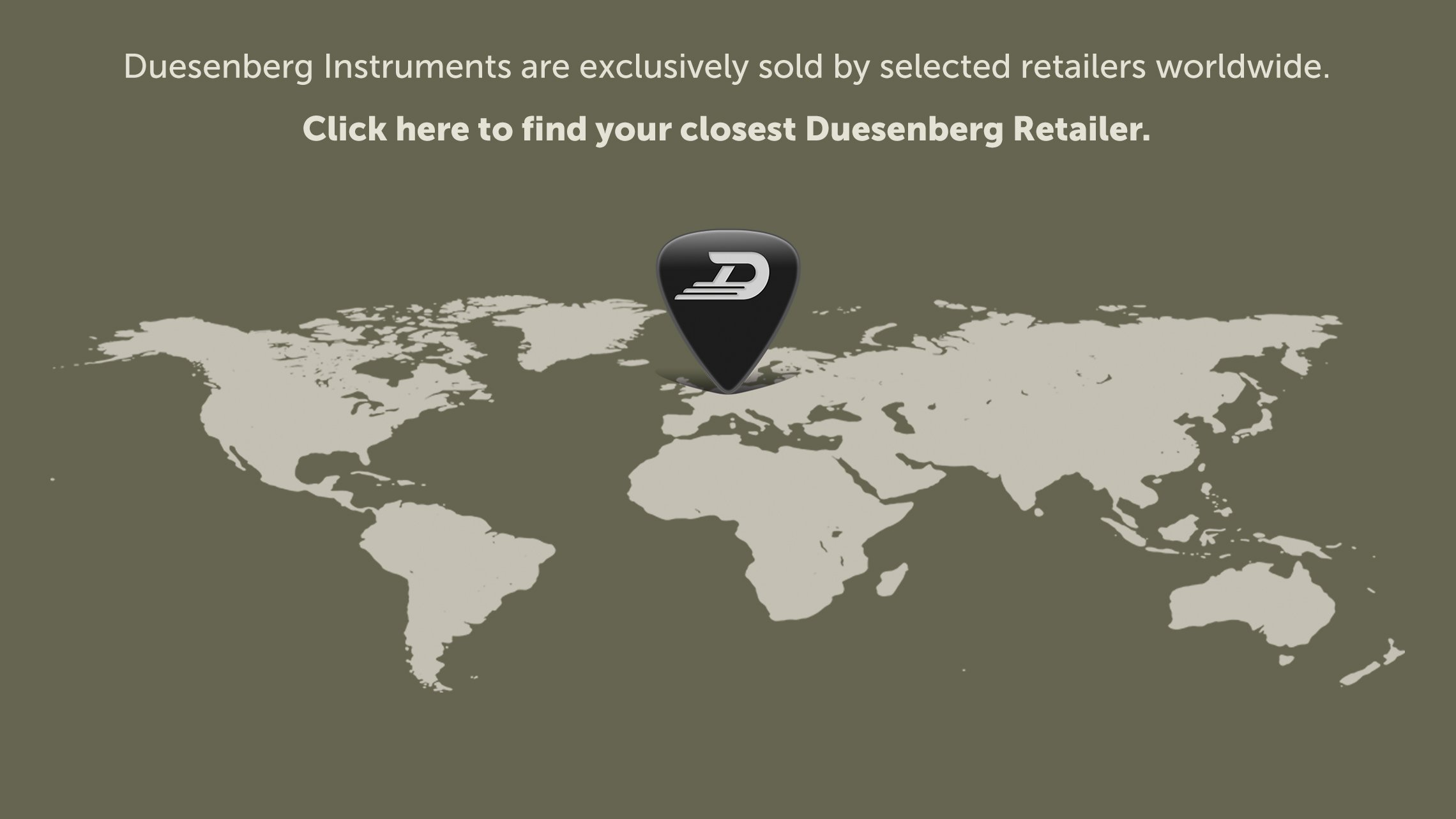 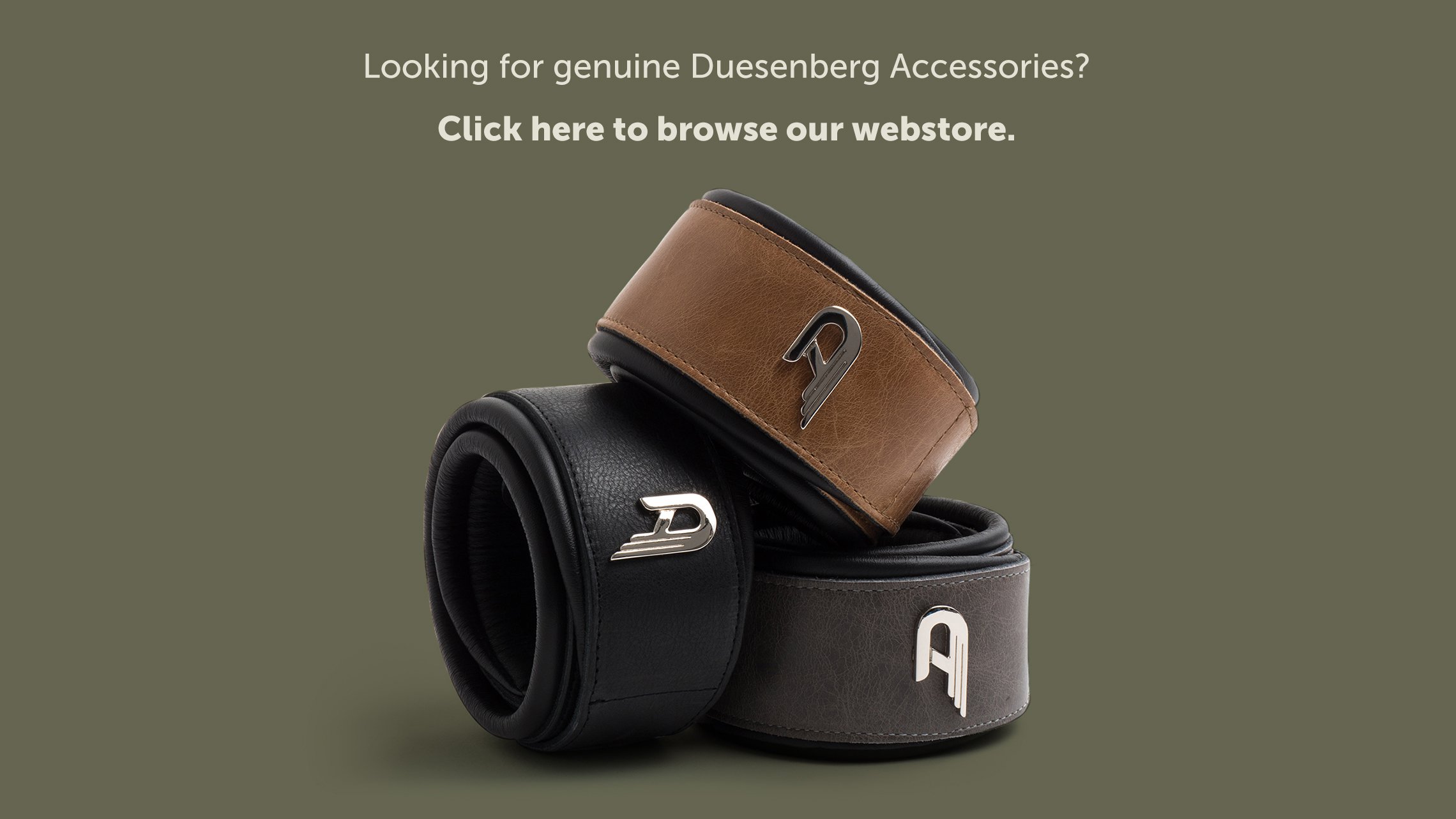 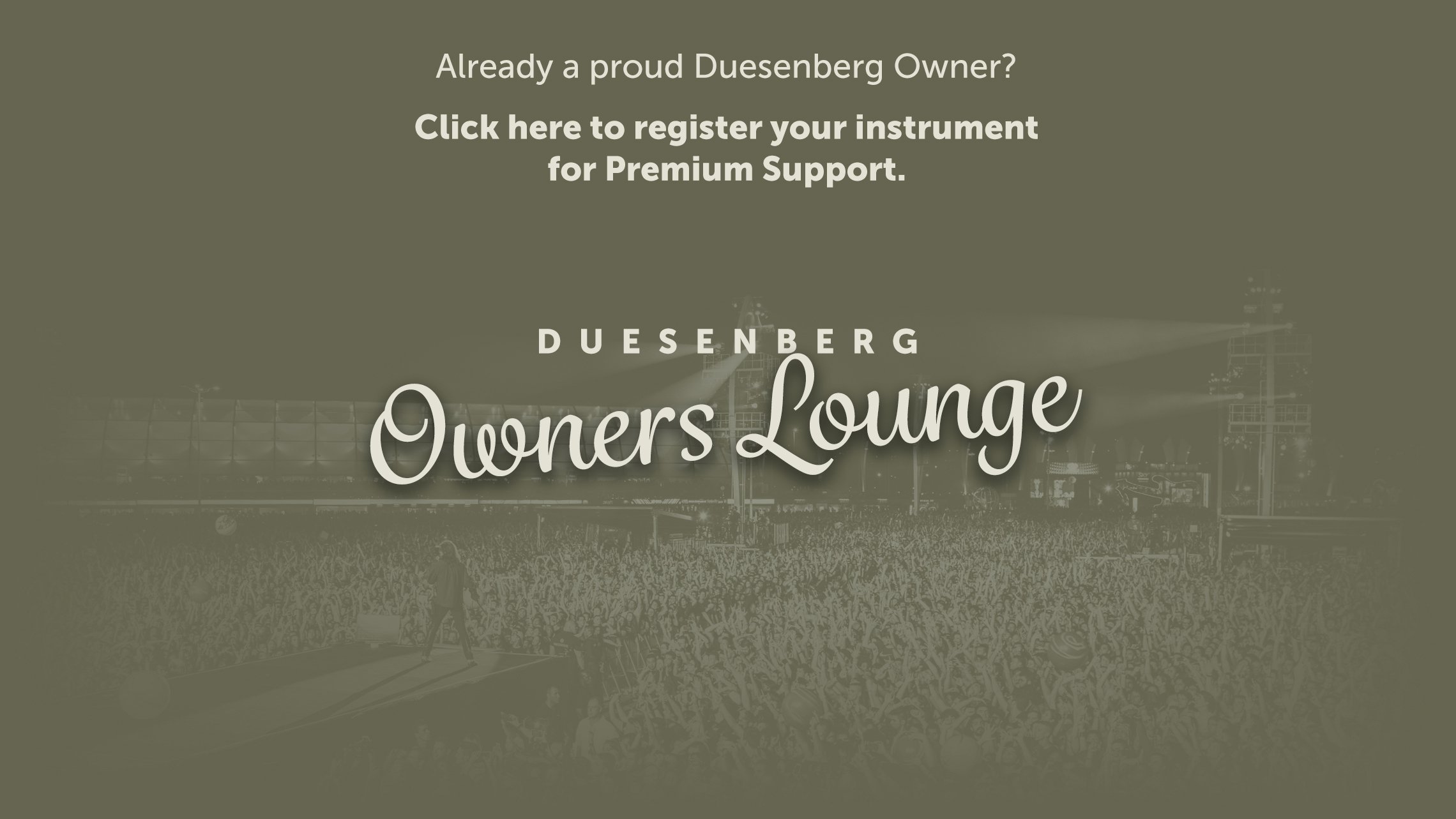 Instruments we created in collaboration with artists around the world. Designed for their individual needs, but made for everyone.

Bent sides and glued on top and back. Added solid center block. The classic construction. Semi-Hollow instruments combine the distinct tone of a hollow construction with the feedback resistance of a solid body. Extremely versatile.

Made from a single slab of wood. Delivers instant response, a lot of attack and sustain and perfect feedback resistance.

Full hollow construction for a lot of moving air and distinct classic tone and response. Exceptional tonal character that is well fitted for clean and crunch use.